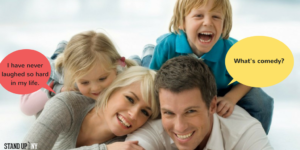 Remember that wholesome television show Kids Say The Darndest Things? Originally the show was hosted by Art Linkletter and later upgraded to a host ripe with sexual assault, Bill Cosby. This was OK though because this was the 90s. Ah, nostalgia.

The program was founded upon the idea that kids are hilarious and of course ‘Ol Cosby’s banter. If this wasn’t enough of a red flag, we’re not quite sure what else is. Any show that tells us to lean in and really listen to what the children are saying is already set up for a hard loss.

Maybe that’s why the show only lasted for two years.

Perhaps the show was created as a way to distract parents from all of the freedom they lost. Who needs nights out to get dinner and drinks when they can sit in front of a television listening to what these random kids have to say?

That would really round out their life.

The only explanation for this was Bill’s sweater collection. It distracted them for far too long. The absurdity of the patterns apparently were enough to let them look past how unhappy they were toting their children around in a minivan to go to flute recitals. How did it feel to lie to Grandma when you told her he was the star football player?

Are kids funny when you have to make chicken nuggets every night because they don’t want to eat shrimp fettuccine with you? What about when you are forced to watch the same Mickey Mouse Clubhouse cartoon every day?

Don’t worry, those ketchup stains will hopefully come out of your brand new couch. And we are sure those episodes of Crashing you really want to catch up on will still be of interest in a couple of years when you finally get around to watching them.

Don’t even get us started on music.

Unless your idea of music is “Kids Bop” and you are also an asshole.