We all know someone that believes in astrology a little too much. They somehow manage to teeter the line between general interest and a cult-like way of life far too often. They also somehow always smell like sage and own a lot of flowy blouses.

These people oftentimes show up at the most inopportune moments. You are enjoying yourself at your friend’s birthday party when ol’ Sage comes up and starts constructing your birth chart. You are then shifted from laid-back party-goer to an innocent bystander trying not to wring star child’s neck.

When did the conversation turn from hypothetical, semi-amusing thoughts to a victim blaming ceremony? I’ve literally had people scream and jump away after learning my astrological sign. After transitioning from confusion to mild irritation, I quickly came to an understanding that it is best to weed out these people from my life anyway. And nothing is more clear cut than the billowy scarf-wearing person who just squealed while opening a birth chart app on their phone.

Call us crazy, but who cares what the moon was doing when we were born? We’re pretty sure it was doing moon-like things. Such as being in the sky. This also applies to water, fire, air or any other aspect of science that may or may not be attributed to astrology.

We understand that it may be hard to determine whether or not the person you are speaking to is going to take the conversation too far, so we have constructed a chart to aid in determining whether or not you need to get the hell out of there: 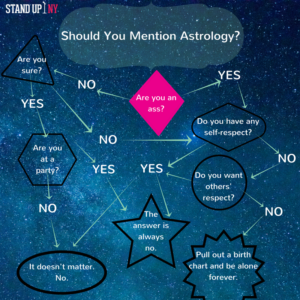 While the original thought of discussing personality traits may be initially entertaining, there is no need to take it further than that. The descriptions of the signs are so vague that they can apply to almost anyone at any given time and to see people freaking out over them is hysterical.

Look, we wish they were true! It would be super cool. But it’s just too ridiculous. It’s nothing personal. We just think that taking horoscopes too seriously is an absurd character flaw and renders a person entirely unstable. That’s all.